Why simulation? If your idea doesn’t work in simulation, it will not work in reality at all 😉

Download my tutorial files and extract them to your home folder (~/catkin_ws/src/…): https://drive.google.com/open?id=1NtF2NFOGf9EggCGFjO9FyXdfi7efdqL0

Add something like this to the end of your .bashrc (~/.bashrc) – NOTE: order is important:

Run this in a new terminal and verify the ROS folders now are included:

Run in terminal to verify everything is working correctly:

It should go into the ‘catkin_ws/src/sim’ folder. You are now prepared for ROS 🙂

Go into the ‘catkin_ws’ folder and run in terminal to make the code (this will take a while):

It should complete without errors (in red). If you get an linker error on ‘octovis/extern/QGLViewer’, please  delete that folder.

If you get an error ‘sbpl not found’:

3) The world and robot simulation

Run gazebo with turtlebot in a new terminal:

Play with the keys (u,i,o, etc.) to find out how to steer the robot (NOTE: always activate this terminal window for steering the robot) 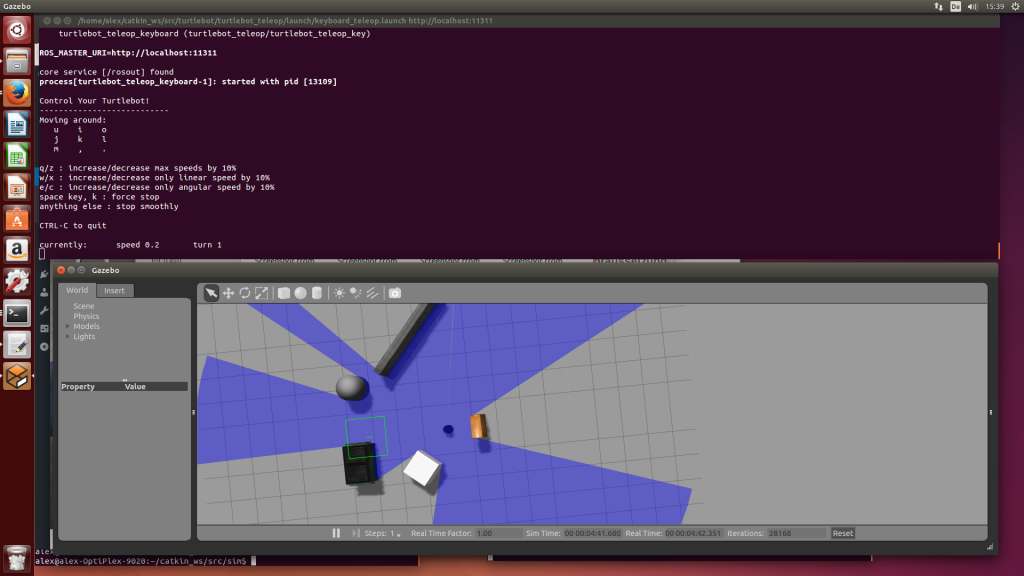 4) Mapping in 2D with 360 degree LiDAR
Run gmapping in a new terminal:

Steer  the robot around to assemble the map. 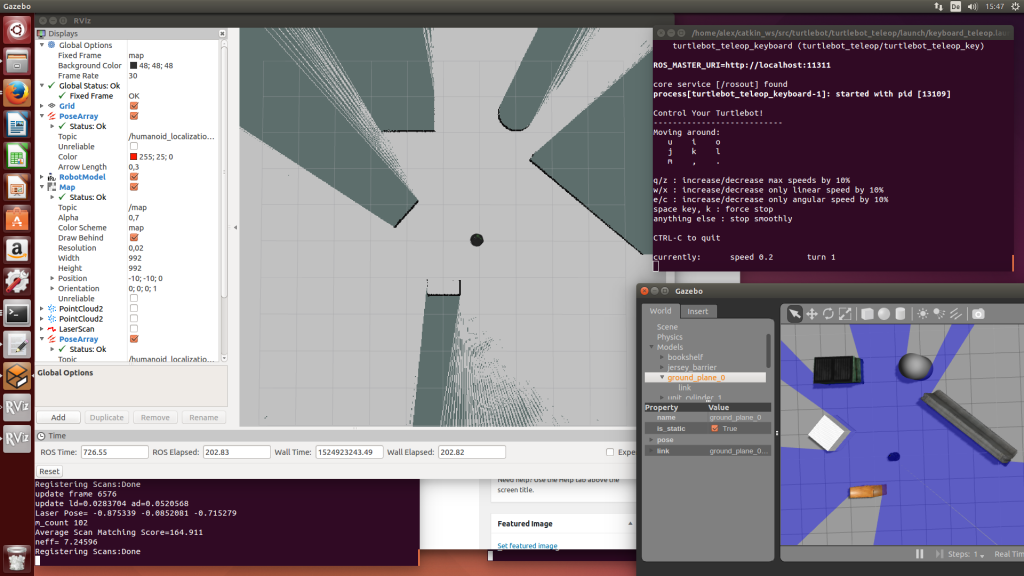 To save the map, run this in a new terminal:

We will now use your saved map for localization. 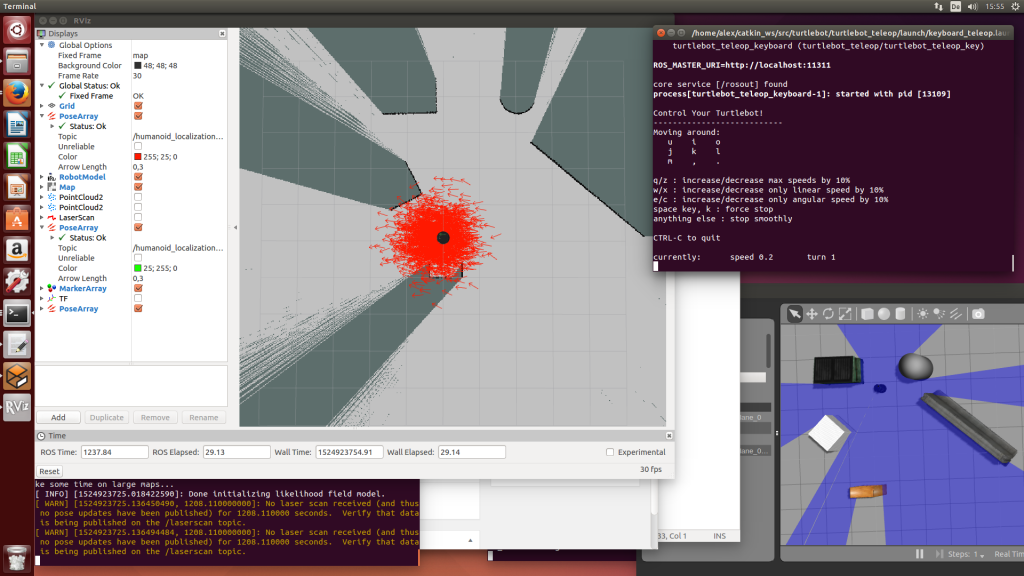 Because our robot actually is far away from the particles, the particle filter will not be able to find the real position. Therefore we will perform a ‘global localization’ to distribute the particles all over the map. Run in terminal: 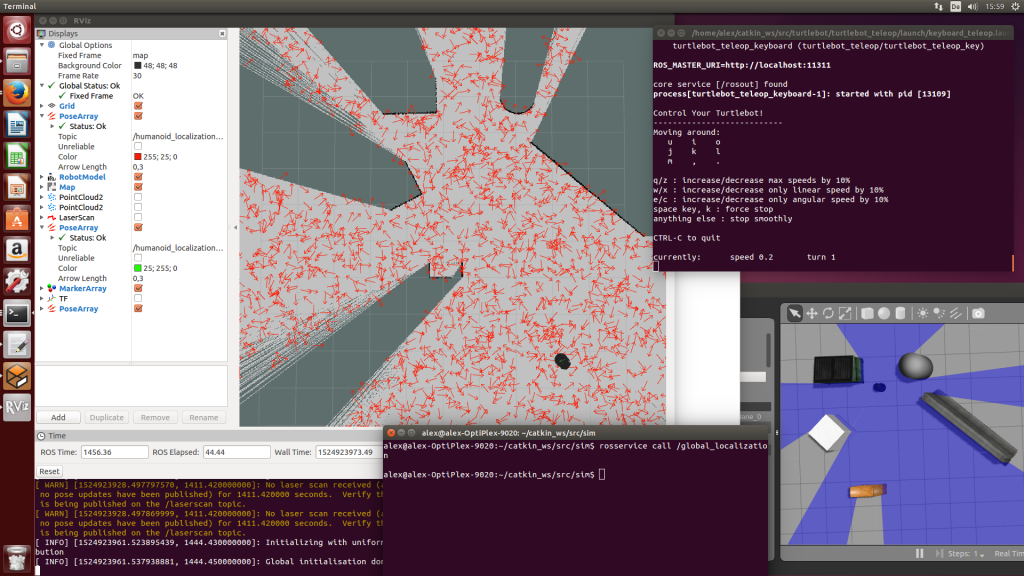 Now steer the robot around. The particles that do not fit to the sensor measurements will be thrown away until finally the particles of the real position survive. Now new particles will be added near the surviving particles to find out a changing position when the robot moves. The center of all particles is the estimated localized position. 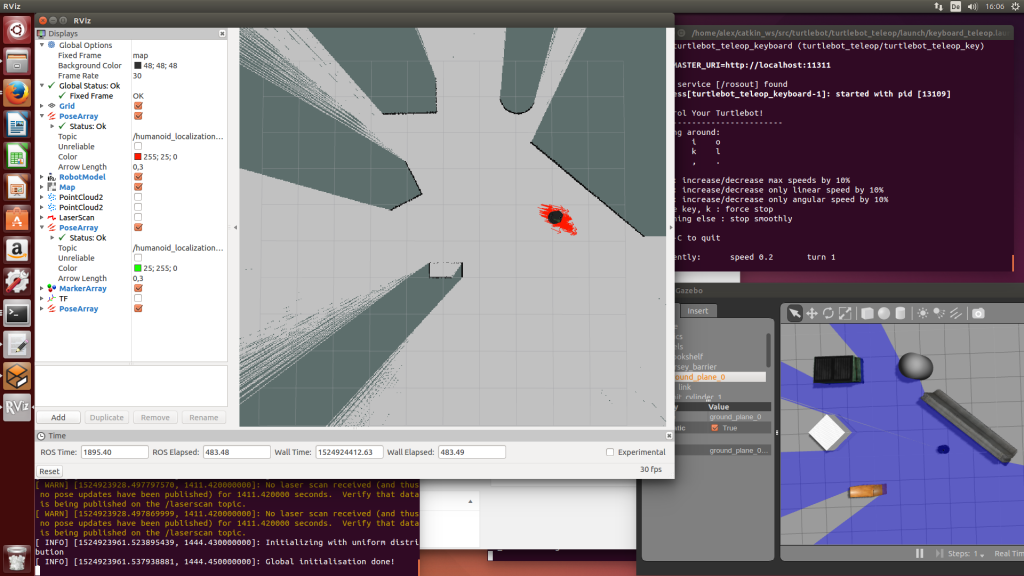 Press ‘CTRL+C’ in terminal to stop the localization.

Run in terminal to start octomap:

If you get an error (octomap_server not installed), try this: sudo apt-get install ros-indigo-octomap* )

In RViz, make sure Fixed frame is ‘base_link’.
NOTE: If the octomap is not showing in rviz, edit the file catkin_ws/src/sim/octomap.launch and remove the line that contains a ‘remap TF’ statement. 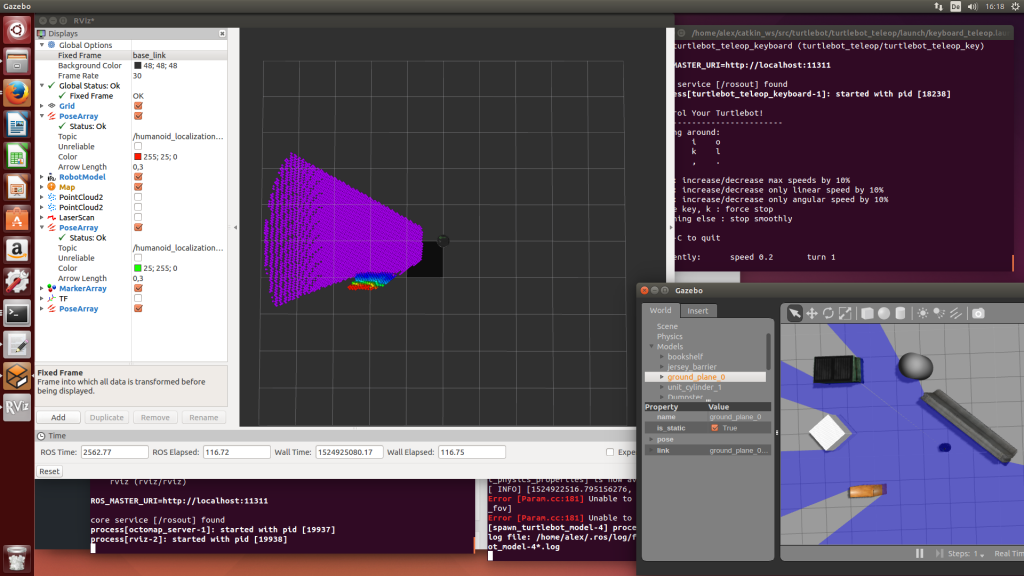 Now rotate the robot until the 3D map is assembled.
NOTE: octomap_server is not a complete mapping solution, for best results one should add another (visual) odometry solution. 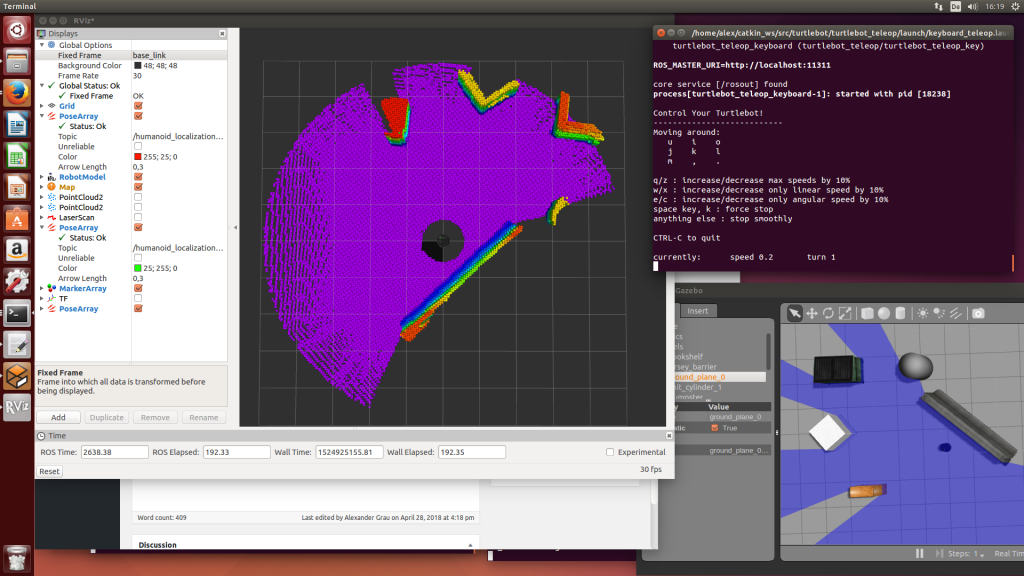 Finally, save the map:

Press ‘CTRL+C’ in terminal to stop the mapping.

Now we will use the saved 3D map for localization. Run humanoid_localization in terminal:

In RViz make sure Fixed frame is ‘map’.

At first, the particles will be distributed all over the map (global localization): 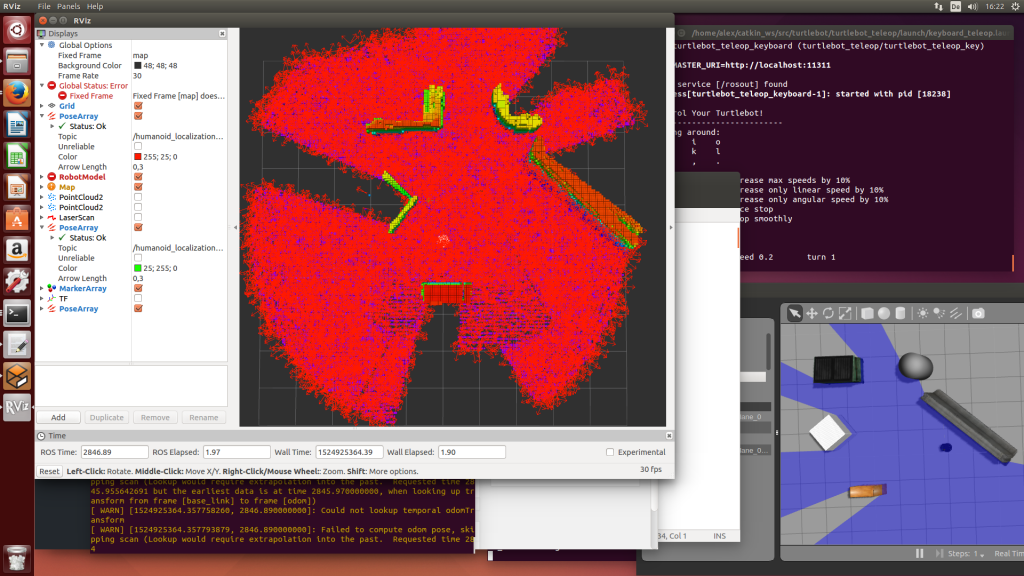 After a short while, the particles that do not match the sensor measurement are gone and the real position is found: 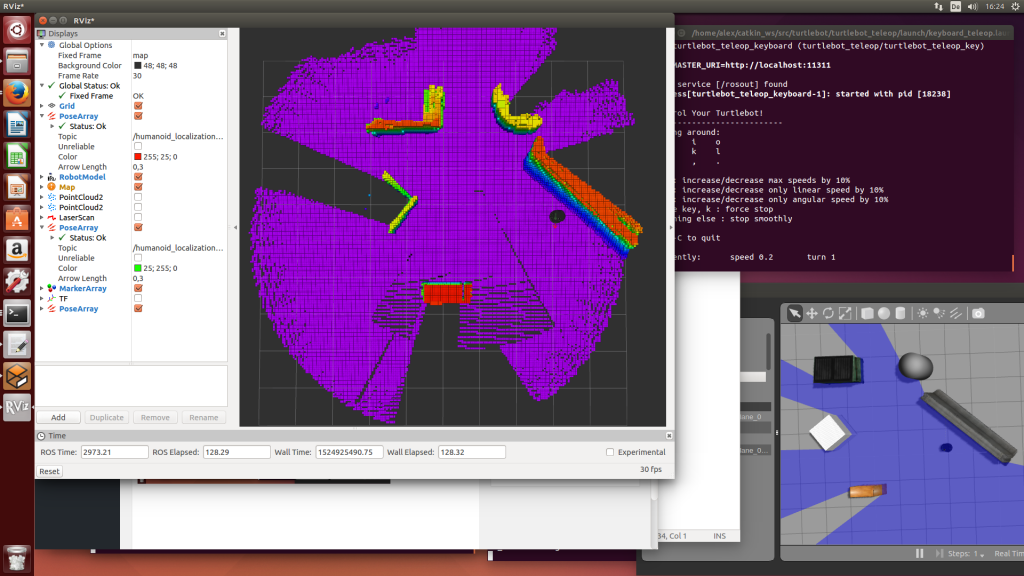 While you steer the robot around, new particles should be added to the existing particles to filter out the real position.

8) Localization and mapping with a non-flat ground

Until now we used a flat ground for the robot. If you want experiment with an height map as ground, edit the file ‘catkin_ws/src/sim/turtlebot_world.launch’ and change the line for the world:

Now restart gazebo with turtlebot (use CTRL+C to stop it). Use octomap to generate the new 3D map, save it, and finally try out humanoid_localization to localize within the saved map. 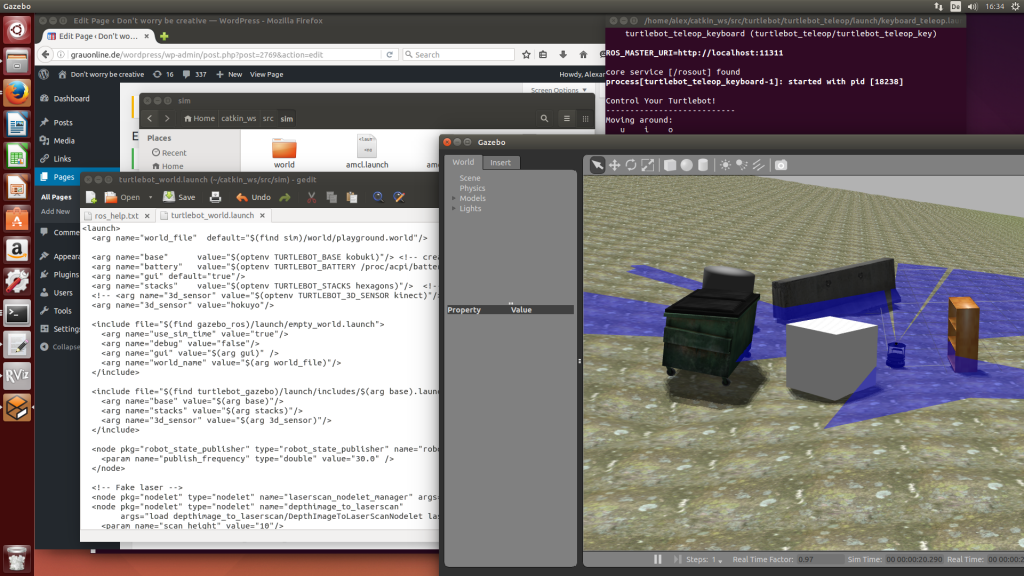 9) Making the transition to the real robot with real sensors

After your ideas are working in simulation, you can go on with the real robot with real sensors. You can use the same launch files:

Some notes for different real sensors:

Using Python you can write a controller to move your robot automatically within the simulated (or real) world. In the example below, the user can define a perimeter in the world and that perimeter will become the working area for the robot.